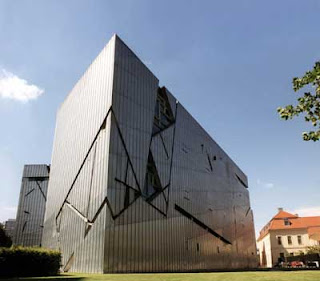 We were told to get to the Jewish Museum early, so we promptly arrived at 10 a.m. It was already bustling, and continued to be full of people with lots of school kids all during our visit. First down a flight of stairs, leading to three different halls: the holocaust, the exile and continuity.
The architecture has brilliance and wisdom in it's minimalism, thanks to Daniel Liebeskind. The shortest hall: holocaust leading to a door with a chilling empty concrete tower. The garden of exile: a stunning grouping of concrete pillars. The stone ground is set at a 12 degree angle, and it is disorienting. I found a you tube video of it, which is quite good for experiencing it. The hall of continuity extensively presents centuries of Jewish  history. We were there for more than 4 hours. It is a wonderful museum. 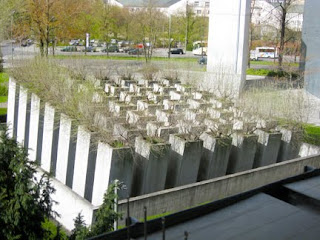 here is the garden from above
We then walked to Check Point Charlie, and then on to the Memorial to the Murdered Jews of Europe, by Peter Eisenman. A series of 2711 concrete stelae which can be walked through from all sides. 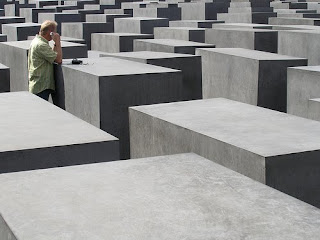 I thought this was totally stunning, and a wonderful memorial. It is near the Brandenburg Gate, and you can see the Reichstag on the left and the Brandenburg gate on the right. 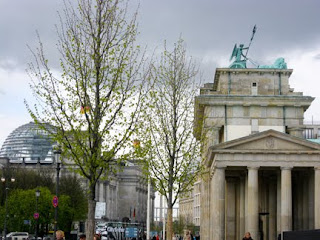 Tonite we meet friends from Santa Cruz a the Schnee Weiss restaurant. The reviews look great. More later about that dinner.
Posted by Daniella Woolf at 9:21 AM