Cogito Ergo Spud. I think therefore I Yam. That was a theme party we had here in the 80's for B.Modern's birthday. It was up in the loft at the house on Beach Hill. That was the old Niki Marx studio. I saw a slide of her work at an R and F class. She was taking flower petals and applying wax over them, and let the sun do the fusing. New Mexico...good sun for fusing.

Anyway in the 80's, we didn't have much money. I started having these parties I called The Soiree de la Pomme de Terre. I would bake up an oven full of potatoes, and the guests would bring the fillings. The very first one I had, was when we lived on Laurel Street. I invited my new friends B.Modern, and Beth Regardz, and a few others. Beth brought Fast Edy whom I had only heard about. Edy brought one of those small makeup suitcase bags, like our moms used to travel with. She sat at the kitchen table, opened the little suitcase and took out a Bar B Q skewer and began removing little paper magazine cut outs of potatoes out of the case, and skewering them. I think it was my first exposure to performance art. She did it completely straight faced, with such intent! Beth Regardz arrived wearing an orange ensenble with silk screened prints of potatoes on the surface. Hmmm, I thought these people in Santa Cruz really get into theme parties! Anyway, yesterday Peter Vizzusi who was always at my parties, sent me this fabulous clip, and called it "spud news." It's this fab quicktime video of 'Lino Tagliapietra, Muranese maestro working for the P.T.Barnum of Glass, with a cute translator.'

Peter is the glass guy of my dreams, (he makes the most gorgeous glassware) This one is my current fave. They are called Red Hots I now have 4! 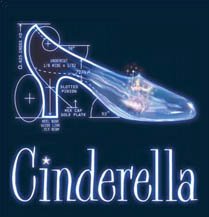 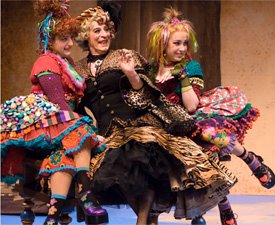 Now that B.Modern girl. She is the Queen of Costumes. She designs costumes for Shakespeare Santa Cruz, San Jose Rep, and other theatres throughout the country. Here is some of her work for Cinderella! A really fun show in the Enclish Pantomime tradition. Joseph Ribero is a hoot. And the evil sisters are. The sheep absolutely fabulous, and Buttons, love him! Kate Hawley wrote it, Paul Whitworth directs...what a team.Only 5 days left. Go See it!

Beth Regardz is the founder of Digital Media at Cabrillo College. She was probably the first person in Santa Cruz to have a Mac. I've never been able to keep up with her on the computer. Her digits fly, as she is the Queen of Keystrokes. In the olden days, she would sit with me for hours on the computer, and we'd do patterns! Yum. Her special love is letter forms. Someday, we'll see an animation from her. This is a special "Pattern" she designed for me for a future show. Beth aways says Pattern Matters.
Posted by Daniella Woolf at 6:01 AM

Thanks for the story, it brings back so many memories of those days with the same people....
jim needham