When I hear Lin Haak tell me about all the elements in her paintings, I am more and more drawn in. The same for Michel Tsouris. The same for Shane Miller with her Geisha jewelry. Maybe others would be interested in what inspires me? We all love a good story.

This is what I'm using my blog for, mostly. I see this, it turns into that. I translate? I take dictation? I like to not think about what I'm doing. I know there is cause and effect. It is going on all the time. The good ideas stick with me. They jump out at just the right moment. They parachute onto the surface.

When we returned to Whidbey from the day or so in Port Townsend, and that luscious breakfast at Sweet Lorettes, we stopped at Greenbank Farm to walk Zuma around, and get some exercise for us as well.

A flock of Canada Geese in V formation flew over, honking and squaking madlee. I was restimulated. This is a pretty long wild story, so fasten your seat belts. 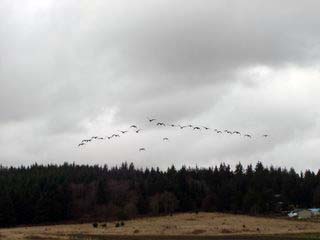 My mother, Sally died at the ripe old age of 92 years 5 months and 4 days. Have you ever noticed that we calculate a persons age more precisely at the beginning and end of their lives? I digress-what else is new? Anyway, one of the people present at her death, was the adorable and lovely Cimeron. A precious young woman who adopted my mom, and vice versa. It was an enormous love fest, and mutual admiration society for the two of them. Cimeron also flew down to LA for my mom's funeral, read a touching chapter about mom from her book about Happiness, then did one short last belly dance for Sally. After the funeral, Cimeron came up to me and told me that during the funeral, when the Rabbi was telling us all these wonderful things about Sally, she said that she saw Sally sitting right on top of her casket, looking toward the Rabbi, and saying, That's a buncha crap! That sounds exactly like something my mom would say. Cimeron then said to me, I don't quite know how to explain this, but your mom is going to "check in" with you soon. It will be immediate, like a love plunger. You will know it's her giving you love.

So I went up to Whidbey with Zuma some time shortly thereafter, to do a little grieving. One morning, as is custom, I took Ms. Z out in the circle to do her business. The circle overlooks the neighboring horse ranch. I watched a filly walk out of my line of sight. I then turned toward the lake. Just then a V of Canada Geese flew directly over me. The vortex of the V flew directly over my head. For some inexplicable reason, I counted the geese. Twenty-two. My mother was born in Canada on February second. I was born on February second. Two-Two. I knew this was the first plunger. 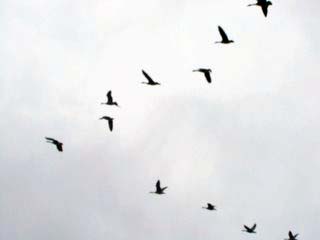 I had taken a bunch of my mom's sewing threads up to Whidbey. In Close Encounters of the Third Kind Fashion (remember when Richard Dry Face was sculpting the mashed potatoes into that mountain shape), I was wrapping mom's threads around my fingers, making circles. It was this obcession I couldn't stop. I had an entire dining table full of them. Again I went out of the house for one thing or another. I returned to find that many of these circles now had flipped into the infinity shape. Another plunger?!

Later I went to the beach to walk the dog. Feathers everywhere. I couldn't get away from massive feathers on the beach. Hmmm.

So I started this series called Infinite, in tribute to my mother, and the love plungers that she gave me early on in the grief process. 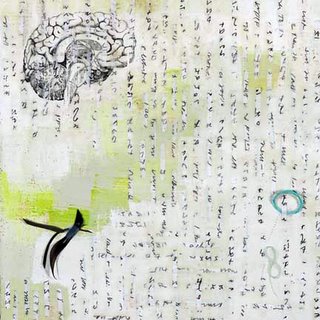 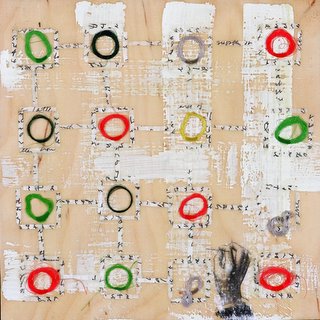 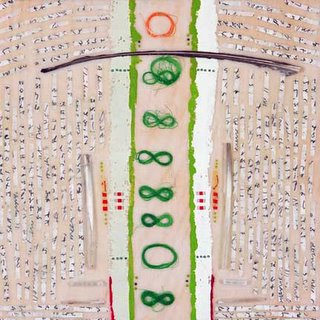 To my good fortune, Cimeron and I have adopted one another, and call each sister. Thanks Mom for bringing Cimeron into our lives! And thanks always for your never ending source of inspiration. We all miss having you around in person.

Posted by Daniella Woolf at 9:08 AM

That Sally, she was inspiring in a lot of great (and not so great) ways! But the way you take your creative process out of whatever comes your way is the real inspiration. Great stories today, thanks!

talk about inspiration, Sigrid! You are mine.
bisous
and thanks for the Philly Cheesesteak.

Such a fantastic story. I love this. The sense and presence of your mother in such disparate or dissimlar things and pieces. I love how art is constructed from all of it. And such good story-telling.