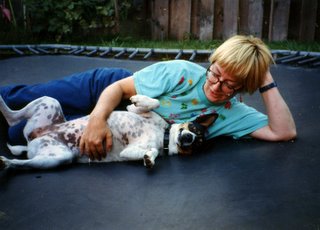 Lola and Kim on the Trampoline.
I write with a heavy heart about our dearly departed dog Lola. She passed early on Wednesday morning at the UC Davis Vet Hospital. We know she received absolutely the best care. Her heart simply gave out. Turns out that the lower part of her heart (ventricle) was quite diseased, didn't have the electrical system functioning to pump blood into her system. It was only pumping twenty beats per minute. There were no symptoms until last Saturday. It has been so shocking to loose her so fast. We had so much hope that she could recover with the implant of a pacemaker, as all the tests from the vet were normal. Lungs, abdomin, blood and urine were all normal. We were thinking that her heart was so big she blew it out by giving so much love to so many!

Lola was the biggest bestest butchest (she was always taken for a boy) Rat Terrier that every was. Lola had an enormous heart, giant spirit and deep deep soul. She was a love magnet with a huge presence. Such a noble being. Loyal in every way. She had crackling energy. Simply exuberant. No fear. A shining star. We had the good fortune to have Lola was our best pal and companion for 13 years. Kim's tribute to her is on her blog, Secret Garden. 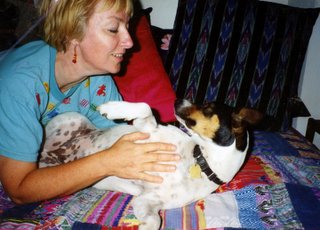 We got Lola on New Year's Day in 1993. We were staying with our friend Lynn in Merced, who thought that it would be good for Kim's son Tommy to have a dog. We agreed. Lynn said that Rat Terriers were the absolutely the best dogs. We found an add in the paper that there were Ratty puppies in Fresno. So in the pouring rain we drove an hour to the hills of Fresno to see about getting one. All we had to do was lay eyes on her. She made this prancing gesture, rearing up on her hind legs and exclaiming with her front paws up in the air. We all pointed to her, and said "that's the one!" She was so tiny, she fit in Tommy's Army jacket pocket. Mmmm. She had puppy breath. 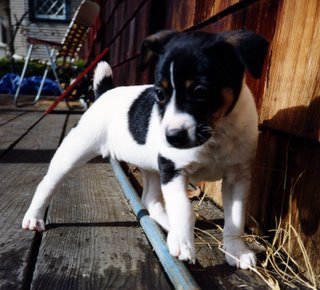 Tiny puppy Lola on the front porch in 1993
She had this goofy look we'd call the "Mickey Smile." When she smiled, she looked just like Mickey Mouse! I have so many memories of her through the years. Lola had the most beautifully formed feet. I called her popcorn toes. And yes, I used to sniff them. 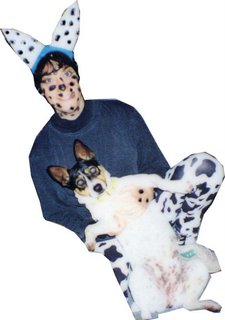 In 2001, I went to Cabrillo College to study digital media. I took a great Dreamweaver class with Wendy Norris. I did this website called Terrier Republic, in honor of Lola and Zuma. It's all in black and white, with some silly visual puns. Dogs that rollover when you "mouse over them." Here are some photos of us at the Dress Like Your Pet Party! 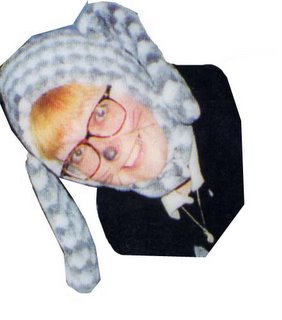 Posted by Daniella Woolf at 7:42 AM

Wonderful tribute to your sweet Lola. She was a fine, crackling-energied, beautiful creature. We are so sorry for your heart-breaking loss.

I'm so sorry about your loss. She was a sweet girl, and lucky to have you two be her family with zuma. I'm sending sad love for you all.

Little Lola... I only met you once, but I was hoping to spend more time with you. Just yesterday I heard a Ray Charles song "Roll Around Heaven All Day" and those familiar tears came, the ones that come when I think about my retriever friend Beau. Once a dog is in your heart, they always stay.