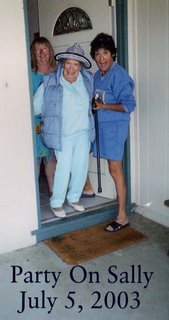 Today is the three year death anniversary of my mother, Sally Woolf. She was 92 years, 5 months and 4 days old. Funny how we count the age of a baby in days and months and when you get to be a certain old age, you count in a similar fashion.

The night before she died, we went to a birthday pool party for our dear friend, Melissa. Mom was the Life of The Party (always), ate Bar- B-Q, and beat me at her favorite card game, Spite and Malice. Just as we were leaving, Melissa said, "Wait, I gotta take a picture of you before you go." This was the last photo taken of Sally before she died.

She was one spunky gal, and such a character. People who met her never forgot her! There is so much to tell about her and my dad. Some day I'll start a series about them, growing up in LA, and being in the Motion Picture Biz...The Industry, as they called it.

When I drove her home later that evening, she said her mantra, yet again, "I wish I would just go to sleep and not wake up." Well, that is sort of what she did, except that the next morning, she actually did wake up. She had a date with her friend Carole to visit their favorite nursery in Pacific Grove. Carole arrived, and shortly thereafter, mom had a massive stroke. Kim and I received a call from the home in which she was living, that she was on the way to the ER. We rushed to the hospital to find her on a respirator, which we had removed, per her previously expressed wishes. She never regained consciousness. Kim, Cimeron and I and Sally's Godson, spent the rest of the time with her as she went through her transition. It was the most amazing process I've ever witnessed. I was honored to be there with her, holding her hand. When she passed, every wrinkle, care and stress had left her face. She looked like a little baby angel, completely at peace. I miss her every day, and feel so sad that I can't ask her so many questions, hear her stories and listen to her speak yiddish.

I love this story about your mom. You know the way she passed through this life was like watching the beautiful, flickering and magical fireworks on the 4th of July. I've always loved watching the shimmering way they would light up the sky and then flicker out like bits of glitter floating and then disappearing. How appropriate that she left this life the day after the 4th of July. I feel like I knew her because I know you and it is strange because the one word that always comes to mind when I want to describe you is "Firecracker". You are indeed, your mom's daughter! love you.

(0)
A stone for her grave. She sounds like she was a great mom, and I'm sure you're a lot like her. Beautiful tribute to her, Dotty.

Such an adorable photo of you & your Mom! I can feel everything you're sharing about your love for her. That Mother-Daughter bond is so powerful. I'll remember your story always when my birthday rolls around on July 7th. I think it's so fortunate that you were with her while she made her final transition. It's an amazing experience. Thinking of you...

dotty - yer mom has the BEST inscription on her cyypt! God bless her! How sweet that she looked like a little baby angel...i think, maybe, that's what she was.

beautiful post, I can feel your love and your pain of loss. hugs.

(PS my fav grandma is buried along with her husband and his TWO former wives. She wanted my dad to write "Just one of Robbie's Harem" on her stone but he never did. Maybe I will....)